Steller’s sea lion is the biggest member of the eared seal family, and it inhabits only the Northern part of the Pacific Ocean. Natural scientist George Steller was the first to ever chart and catalog seals, which he did in the 18th century. Every child in Kamchatka knows what seal is, and many of these children have fed this sea animal with fresh fish at least once. Here in Kamchatka seals live side by side with people, often swimming in Avachinskaya Bay together.

Seal males are called bulls, and it’s easy to distinguish them from females: the bulls are 3 to 4 times as big as females, heavily built with thick manes around their necks. The weight of a bull seal can exceed one ton, or 2,000 pounds. Their impressive roar reminds one of a ship’s horn and is heard for kilometers – that’s why they are called sea lions!

Even though seals look clumsy on shore, they are actually very strong and nimble animals, which swim and dive very well. Searching for food, these animals can dive to a depth of 227meters! Their diet consists mainly of fish, squids and octopuses. Seals can easily climb out of water to high breeding grounds, clutching with their flappers at almost imperceptible rocky nooks and ledges. Their dives into the water can be from as high as fifteen to twenty meters, and are better than any from professional athletes.

kilo is the weight of an average fully grown adult male

Seals live together in large groups

Their annual life cycles are divided into two periods. The first one is nomadic, when seals stay in water moving from one feeding location to another, getting out of the water only to rest. The second period is breeding, when seals spend most of the time on shore and get into the sea only for eating. Seal breeding grounds are located on rocky outcrops and stone shaped isles, and they are divided into harem-like and bachelor-like areas. Harem grounds are meant for reproduction, bachelor areas are for seals who don’t take part in the reproduction process. In early May big males come to shore first and occupy their grounds for future harems.

These grounds will not only be occupied - bull sea competitors will fight for them savagely and cruelly, as nature dictates. Then females will come when the grounds are finally occupied and a leader is determined. Females choose males of their own accord, and that’s how harems are formed. One harem may contain as many as 15 to 20 females. Since mid- July harems start disbanding, and seals go back to the water searching for food. During this time seals come to the bachelor areas for rest.

When the stones ice up in winter, seal grounds are moved to coastal beaches that are closed from the fierce winter winds. Seals are included in the Red Book of the Russian Federation as a species with reducing numbers, and they are also listed in International Union for Conservation of Nature and Natural Resources as a likely endangered species in the near future.

Kamchatka is one of three places in the world where seals live within the town. They settled in Mohovaya Bay - seals move to there when winter comes and go away only at the end of April. You may observe seals from a special viewing platform, and if you buy fresh fish in a local shop you will have a chance to feed these sea animals! In the summer you can observe seal breeding grounds during a one-day excursion to Russkaya Bay, and also during multi-day cruises. Swimming around seals in a sea kayak is a distinct pleasure which is also a part of our two day sea catamaran trip program. 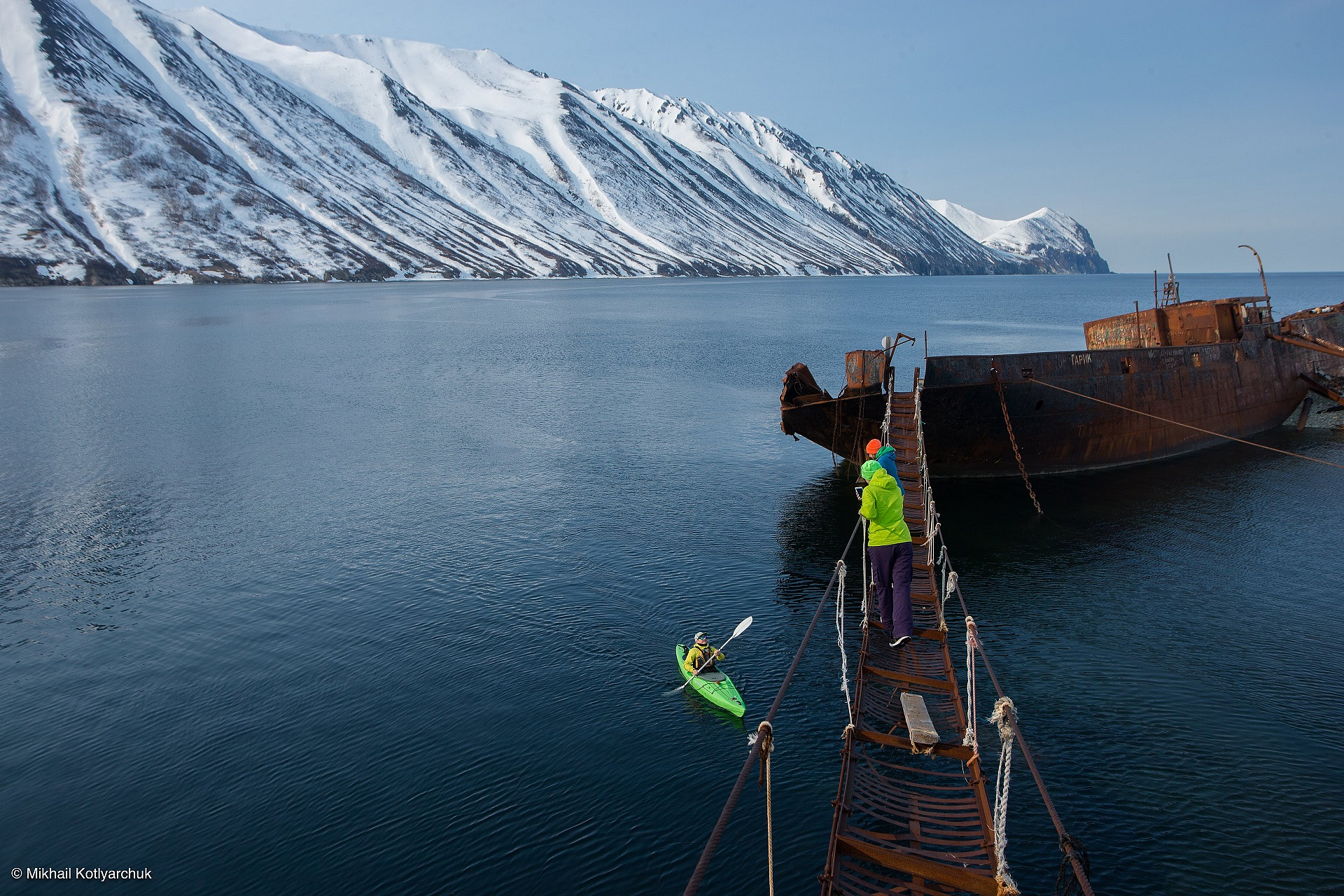 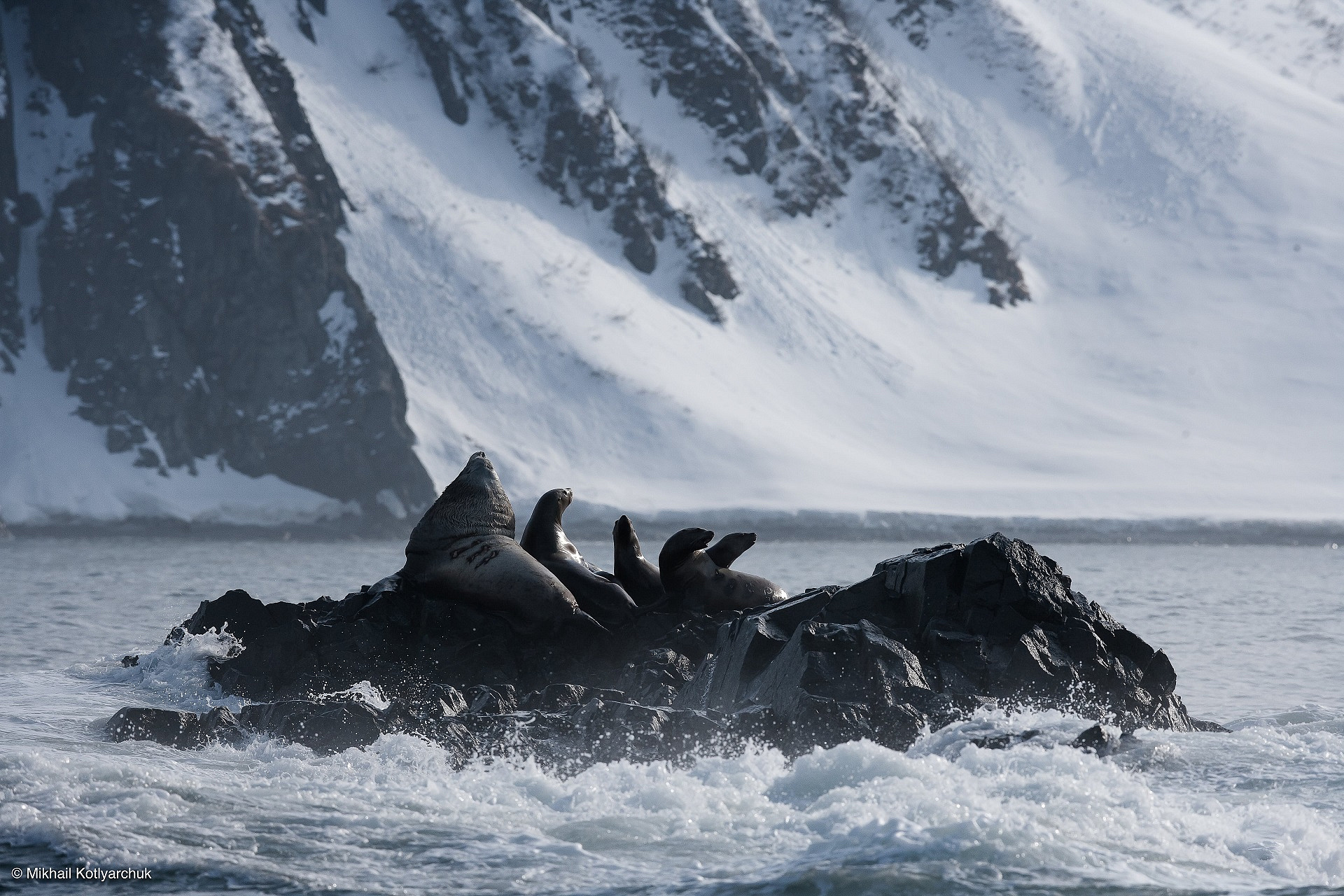